Everything about Muharram and Ashura Traditions in Different Parts of Iran 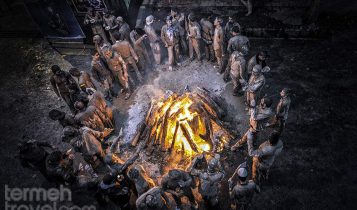 Iran is a country with a diversity of ethnic groups and their unique traditions, but one of the things that most Iranians have in common is their religion. Iranians are mostly Muslim; but even in this common aspect, they are so different. To understand these differences, we are going to explore an event that happens nationwide on the first ten days of the month of Muharram, especially Ashura, and how different it is held in different parts of the country at the same time. However, to understand that, we first have to know what Ashura is and why it’s important.

Ashura is the tenth day of Muharram (the first and one of the sacred months of the traditional Islamic lunar calendar) in which Hussayn Ibn Ali and his followers got martyred by Yazid’s army in the battle of Karbala. The day of Ashura will be on the evening of the ninth of September and end on the evening of September tenth, 2019. Shia Muslims believe that the death of Hussayn and his family in Ashura shows people the value of standing for what you think is right. In the battle of Karbala, Yazid’s armies surrounded Imam Hussayn and his family for days, stopping the flow of water near their camp. They could not even get fresh water and had to survive with all they had for several days, but they stood against injustice and showed the value of truth. It is significant for Shia Muslims to cherish Muharram, especially this day and practice having more spirituality and morality in life.

On this day, Muslims of Iran mourn the death of Imam Hussayn with singing Noha, which is a type of laments and chest-beating to show their grief. Distributing food, especially the most known food for mourning ceremonies called Khoresht-e Gheymeh, or the beef and split peas stew is a common tradition. Also, in every part of Iran, people perform a type of ancient Persian opera or play called Ta’zieh, which is translated to condolence theater. This play is a way to express their grief by dressing up as the main characters of the battle of Karbala in order to show the events of Ashura to people.

Now, we are going to focus on unique traditions in seven cities of Iran.

How Is Ashura Mourned in Bushehr?

People of the south are full of emotion. In Bushehr, people show their grieving by playing cymbal and their traditional musical instrument called Dammam, which is a type of drum. Seven Dammams must be played. There are four regular size Dammams, two big ones and a small one to create a sorrowful piece of music. Living near the Persian Gulf got people inspired by the sea, so they created a unique way of mourning. People of Bushehr form multiple circles and mourn for Imam Hussein by chest-beating. Someone who sings the Noha or laments stands in the center of the rings to lead the others just like a shipmaster.

During Muharram and especially in Ashura, people of Bushehr cook traditional foods such as Gheymeh Boushehri and distribute it among people. This stew is different from other kinds of Gheymeh. For making it, people overcook all the ingredients which are split peas, meat, potatoes, fried onion, and tomato sauce to be mashed. Then they garnish it with fries and serve it with Shirin Polo, otherwise known as sweet rice.

Lorestan is located in western Iran and has a rich culture. To show their grieving, people of Khorramabad, which is the capital of Lorestan province, prepare big basins of clay with rose water and put them in the main squares of the city. Mourning people go there and cover their bodies with the mud. Pouring dust on the head is the symbol of grieving in Iran and mostly among people of Lorestan. Also, they sing a traditional lament called Chamari or Chamarouneh, which is a very gloomy song in their dialect and light candles for Imam Hussayn.

To bring light to this sorrowful night, people of Shishvan village in East Azarbaijan light hundreds of giant torches called ‘Pulkeh’ and spin them in the air. This firework, along with Turkish laments, creates a fascinating and mournful scene. In other parts of this province, people burn tents as a symbol of the burning tents in the battle of Karbala and welcoming mourners with hot or cold beverages depending on the weather, along with small snacks such as bread and cheese.

Mourning for Imam Hussayn in Ardabil is very symbolic. Elderlies of Ardabil put multiple metal basins in mosques and fill them with water from waterskins to depict one of the most tragic scenes of the battle of Karbala. In this part of the battle, Imam Hussayn ordered his people to pour the water that was left for his family into basins for everyone to drink even though he was thirsty. Then, the elderlies carry these basins and let people drink from them; People believe that this water is sacred and can heal diseases.

People of Mashhad, hold a glamorous ceremony, by gathering in Imam Reza’s holy shrine and light thousands of candles. Mourners sing Noha while holding candles in their hands and show their grieving. They also, make Sholeh Mashhadi or Mashhadi pudding on this day. For making it, people need to cook the ingredients from the day before. They use beef, onions, bulgur wheat, beans, peas, and spices such as ginger and cardamom. They combine and cook everything for hours to have a delicious pudding.

One of the most well-known ceremonies of Ashura is Nakhl Gardani in Yazd. Nakhl Gardani means carrying a palm tree, but people do not use the tree. They use a huge wooden structure to symbolize Imam Hussayn’s coffin because they believe his followers carried his body on a coffin made of palm tree branches. People decorate this structure with fabrics, hanging swords, and mirrors. Men lift the Nakhl in Amir Chakhmaq square of Yazd and others can donate different things such as rice or money by putting them in the Nakhl. This massive structure needs hundreds of men to support it. People from all parts of Iran and even the world gather in Amir Chakhmaq square every year to watch this magnificent ceremony.

The ceremony of Sacrificing

Although every Muslim mourns for Imam Hussayn, In Zanjan this mourning is totally different. People of Zanjan do not do chest-beating, which is the most common form of grieving in Muharram; they only gather and walk to Ibrahim shrine in their city while whispering traditional Noha. They sacrifice many cattle for Imam Hussayn to show their respect. After the great sacrificing ritual in Mecca, Zanjan would be the second place in which people sacrifice animals because of their faith. People of Zanjan use this meat to help the poor and make food for everyone.

The events of Ashura and Imam Hussayn’s characteristic has not only affected Muslims of Iran but also many people around the world. Even Mahatma Gandhi honored Hussayn ibn Ali and said, “I learnt from Hussain how to achieve victory while being oppressed.”

Read More »Are Iranians Arabs? A Comprehensive Overview
previousEid al-Adha(Eid-e-Ghorban) In Iran
next13 Best Hotels and Hostels In Tehran