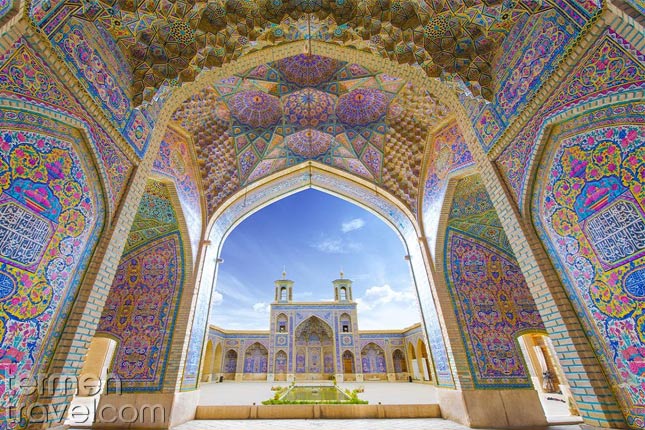 As an ancient country, Iran has witnessed a variety of religions throughout history. From Zoroastrianism to Islam, each religion influenced this gorgeous country by its culture and art to make it the land of diversity. The existence of religious buildings in different cities of Iran which are available for people to practice their faith show the unity in diversity. Visiting these religious sites is a great opportunity to enjoy the fabulous architecture and culture of Iran. In this article, we will take a look at the religious Attraction of Iran.

Imam Reza or Rihda is the 8th Shia imam. He was born in Madinah and lived during the Abbasi Caliphate. He traveled to Mashhad because of some political difficulties and eventually got poisoned and martyred. People call this city Mashhad because it comes from the word “Shahid,” which means Martyr in the Persian language.

This holy shrine attracts 25 to 30 million tourists every year. The building is marvelous. The main entrance is made of gold and decorated with blue tiles. The interior is designed with mirrors, which makes this place even more fascinating. Most parts of the shrine were built by donation money which shows how sacred this place is for Shia Muslims.

Fatima Masoumeh is the sister of Imam Reza; who passed away in Qom and was buried there. Qom is a city near Tehran that is known for its spiritual atmosphere among people. Fatima Masoumeh is a holy figure for Shia unmarried girls because she is the symbol of decency.

Her shrine is also made of gold and beautiful mosaics. One of the most amazing parts of this shrine is its dome which contains carved poems explaining the history of the shrine.

Shah Cheragh literally translates to the king of light, and you can sense it by just looking at the bright and absorbing shrine. This place is a funerary monument for the brother of Imam Reza, Mousa Al Kadhim, located in Shiraz.

The decorations are eye-catching even for non-Muslims, and the use of mirrors on the walls and colorful Persian rugs on the ground is spectacular. You can enjoy the calmness and spirituality due to the beautiful blue color of tiles.

The Vakil Mosque was built between 1751 and 1773 and renovated since then. The design of this mosque shows the artistic spirit of Shiraz. The entrance is fabulously decorated with seven colored tiles to illustrate a rosary. Standing in the middle of this large, empty building, makes you feel the spirituality and unique atmosphere of it.

The Royal or Shah mosque is located in the Naqsh-e Jahan Square in Isfahan. Today many people know the mosque as Masjid I Imam as well. The unique thing about this place is its sound system. Because Mosques were a place for a big group of people to hear lectures from clergies, it needed a perfect sound system. Using the technology of that time, builders were able to build a mosque with an impressive sound system that let everybody hear even the lowest whispers. If you stand in the middle of the mosque and speak, others can hear the echo of your sound.

The marbles and blue tiles designed with Islamic patterns show the rich background behind it. Also, the combination of Persian and Islamic art in this building makes it phenomenal.

Another religious masterpiece in Isfahan is Sheikh Lotfollah Mosque. The process of building it finished in 1619, and since then, this place is considered as one of the most beautiful and spiritual mosques.

The design of this building will automatically lead your eyes to the center of the elegant dome. Tiles of the dome are blue and gold, which are the two main colors of Iranian religious places.

You can also see the calligraphy exhibiting the titles of Shah Abbas I, located right on the entrance of the dome. He was the king of Iran during that period of time.

Nasir-al Mulk mosque or the Pink Mosque in Shiraz is a unique architecture in the Muslim world. This mosque is famous for the color and the pattern of its tiles. The patterns of Persian iris and the pink background on the walls are breathtaking. Symmetry is one of the significant elements of Islamic art, and this element is very bold in here as well.

There is a rectangular pool just in the middle of the yard, surrounded by geraniums flower pots. There are large colorful stained windows inside the building which transfer the light into a colorful rainbow. The best time to enjoy these phenomena is around 10 in the morning. Everything is like a dream in this building, making you wish you had the superpower to stop time and enjoy more.

This magnificent mosque, with its high minarets, is located in the center of Yazd.  Building this place took a century, but the outcome is impressive. The unique lighting of this mosque makes it outstanding. The light hits the plaster wall and reflects on the colorful tiles. Today Muslims still use this place for prayers and admire it a lot.

In the middle of a beautiful garden, there is the building of Yazd’s Fire Temple, which was built in 1313. The first thing that attracts you when you enter the place is a burning fire behind a glass. This fire was burning more than 1500 years ago and had never been extinguished. It is called Atash Bahram or The Victorious Fire and is considered as one of the nine highest grade fires among Zoroastrians. Fire is a sacred element for Zoroastrians. They believe that by keeping the fire burning, they can vanish Ahriman, so a prominent Zoroastrian cleric is responsible to keep the fire alight. Yazd’s Fire Temple attracts many visitors throughout the year who are eager to see the sacred fire.

Another sacred place for Zoroastrians is Chak Chak or “Pir e Sabz.” The story behind this place is very interesting: During the attack of the Arabs’ army to Iran, Nikbanou, who was the daughter of the last pre-Islamic king tried to run away to save her life. She reached a mountain in the middle of the desert and Prayed to Ahura Mazda to protect her. The mountain provided shelter for her to survive. The reason for calling this place Chak Chak is because of the sound of water dropping that was given to Nikbanou by Ahura Mazda. According to Zoroastrian’s belief, this water is sacred.

Although the majority of Isfahani people are Muslims, there is a cathedral in this city, called Vank, which means the church. Entering Vank Cathedral is like traveling back in time, where Persian and Armenian architecture meets to create a unique ambiance. The walls and the dome are painted with pictures of the holy book, narrating the story of Christ’s life, punishments of hell and the beauty of heaven. The dance of oil colors under the light of a glorious vintage chandelier makes you feel the spirituality of the place.

Read More »Are Iranians Arabs? A Comprehensive Overview
previousSnapp and Tap30, Iranian Versions Of Uber and How to Use Them
nextPersian Traditions and Cultures